The Epping Forest Archive, a collection transferred to London Metropolitan Archives between 2008 and 2009, is comprised of photographs, diaries, paintings and artworks, maps, documents and paperwork, which has been collected and generated by the City of London since 1878. Please go to http://www.cityoflondon.gov.uk/things-to-do/green-spaces/epping-forest/heritage/Documents/epping-forest-archive-report-2013-branching-out.pdf for more details.

The conservation and cataloguing of the project was grant funded by the Heritage Lottery Fund. The items deemed in need of conservation were 14 Forest Keeper’s Diaries and around 30 maps and plans of the forest. The diaries all suffered to some extent from mould damage and distorted bindings. The maps and plans ranged in condition from having small tears and surface dirt, to large splits and missing areas. Below is a description of treatment carried out on one of these maps. 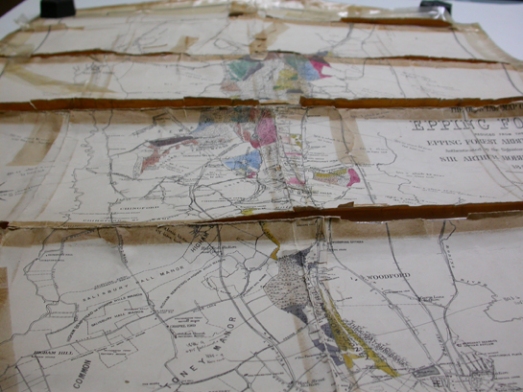 The main aim of treatment was to remove the cellophane on the verso, and the remaining PST underneath. This was a slow process which involved exposing the cellophane to blotter soaked in acetone, which had the effect of softening it so allowing it to be peeled off leaving a layer of adhesive underneath. The adhesive could be removed with a square of crepe rubber. This was a time consuming and delicate procedure due to the brittleness of the support. 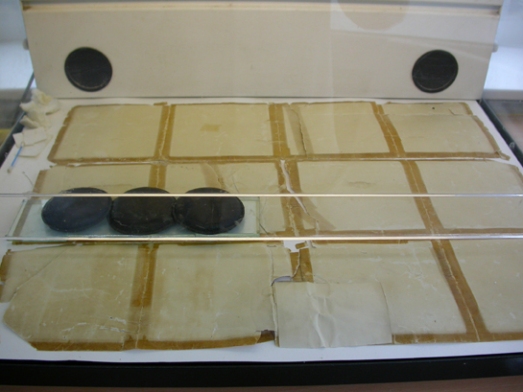 The areas of heavy repair paper (as can be seen at the bottom of the above picture) were removed through the use of a steam pencil to reactivate the animal glue.

All colours on the map were found to be stable, so the map was humidified and wet lined with a thick Japanese tissue. Areas of loss were infilled afterwards. 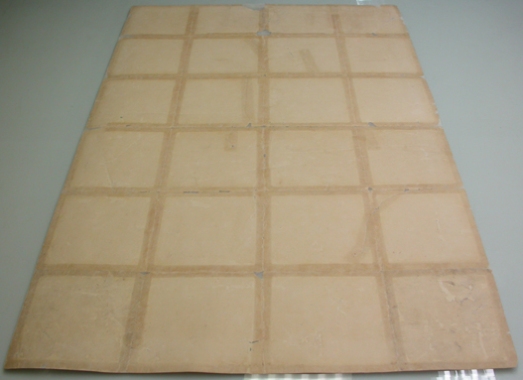 Some of the more severely discoloured maps were blotter washed. A video of the work carried out on one of these maps can be found in this LMA introductory video after about 3 minutes 20 seconds: