The Great Parchment Book project at London Metropolitan Archives was funded by the National Manuscripts Conservation Trust. The aim was to open up the creases in a badly fire damaged parchment document to allow digitisation and so eventually accessibility to scholars and researchers. It was hoped at the beginning of the project that the development of new digital methodologies (along with conservation) would allow the opening up of the obscured text and enable the production of usable 3-D digital images and a transcription of the complete manuscript. Through collaboration with UCL’s Digital Humanities Department, this has been achieved. A video about the project can be found here:

HISTORY OF THE BOOK

The Great Parchment Book of the Honourable The Irish Society is a major survey, compiled in 1639 by a Commission instituted under the Great Seal by Charles I, of all those estates in Derry managed by the City of London through the Irish Society and the London livery companies. As such, it represents a hugely important source for the City of London’s role in the Protestant colonisation and administration of Ulster. However as the result of a fire in 1786 it has been unavailable to researchers for over 200 years. The damaged manuscript has however remained part of the City of London’s collections held at London Metropolitan Archives.  As part of the commemorations in Derry of the 400th anniversary of the building of the city walls, it was decided to attempt to make the Great Parchment Book available as a central point of the planned exhibition.

The book consists of 165 loose parchment sheets, all severely heat damaged. As the project conservator, my role was to find a way of opening up the the very deep creases that completely obscured the text to allow digitisation. The first task was to assess each sheet and describe the types of damage present. 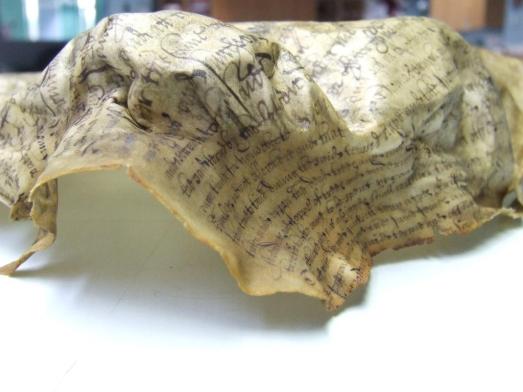 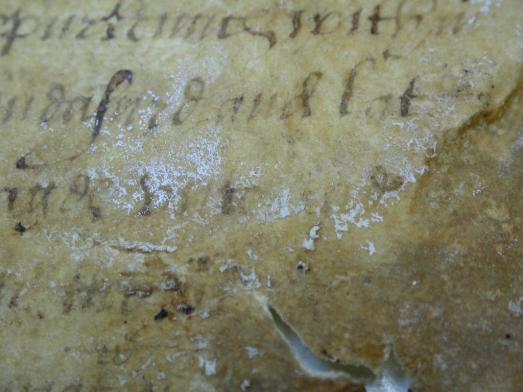 So, just under half of all the sheets were heavily damaged with more than one area of text being obscured by a crease. These sheets would be the most challenging to treat.

A large, discarded, 19th Century parchment document was cut down into 16 small rectangles (180 x 140mm), which were then folded and sewn together to make a replica book. Successful shrinking was achieved through baking the book in a conventional oven and introducing moisture at regular intervals. The temperature was 200oc, and the book was left in the oven for 30 minutes. The best shrinking was achieved by spraying the pages with water whilst in the oven.

The book was disbound and the sheets humidified using both a chamber method and Gore-Tex sandwich and testing the effectiveness of local humidification versus full humidification. Three different tension drying methods were then tried; clips, magnets and suction table.

The clip method was quite successful in reducing the planar distortion on the fully humidified sample. The pins were put straight through the ends of the clips, meaning the parchment was held very taught with not much room for movement. If using this method on the GPB, elastic bands would be attached to the clips and the pins put through these to allow for more flexibility.

It was found that with both local and complete humidification, suction table drying was not appropriate.  It did flatten out the sheet, but pulled smaller creases in more deeply. This method would be more effective on items that were less badly damaged, without shrunken areas, and that could be humidified to greater extent.

The magnet method was very successful, in terms of reducing the planar distortions. The only concern was that it might damage flaky media, and so an extra barrier, between the magnets and parchment might be needed. This method would be very good for badly torn sheets with areas too fragile to withstand having a clip attached.

Prior to humidification each sheet was mechanically surface cleaned with chemical sponges and soft goat hair brushes where the media would allow it. The sheets of parchment were placed in a humidification ‘sandwich’, where they were layered up with Gore-Tex® and damp blotter (see diagram below) and left to gently humidify for approximately six hours. RH needed to be maintained at 90% to allow adequate softening of the hardest areas of the sheets. 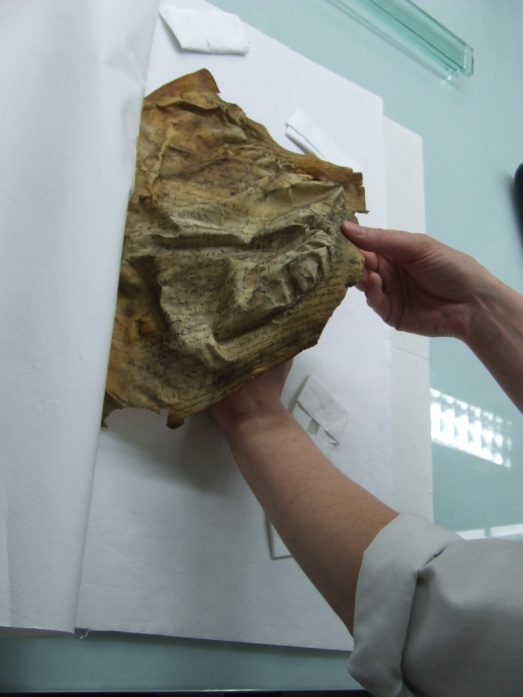 Magnet drying proved to be the most effective method for holding out the creases whilst drying. Metal sheets were wrapped in thin blotter and covered with thin non-woven polyester (which reduces the risk of the parchment sticking). Magnets wrapped in felt and Tyvek® were used to hold open creases whilst the parchment dried. It was found fairly early on that the amount of shrinking present on some of the sheets was preventing the creases from being pulled out horizontally, as was hoped. This was remedied by inserting polyester wadding underneath the creased area and so pushing it out in a vertical direction, as well as pulling horizontally with the magnets.

Magnets being applied to one of the sheets

Stronger magnets being used for the stiffer, more shrunken areas