The Normansfield Hospital was founded in 1868 by Dr. John Langdon-Down and his wife Mary as a private home for people with learning disabilities. It continued to be run by the family as a private home until 1951, when it was sold to the government and became part of the Staines Group Hospital Management Committee. In 2000 it finally closed and the site was redeveloped for housing. The resulting archive from the hospital is now housed in LMA. Originally it was over 103.5 linear feet in shelf length and includes correspondence, patient, staff and financial records from 1855 to 1983. It contains a wide variety of materials, including glass plate negatives, photographic prints, books, plans and files all ranging in condition.

With a grant from the Wellcome Trust, the whole collection was to be conserved (where required) and rehoused over the course of a year. In total approximately 760 items were either conserved, repackaged or both.

By far, the largest and most challenging part of the collection was the 408 box files of correspondence. 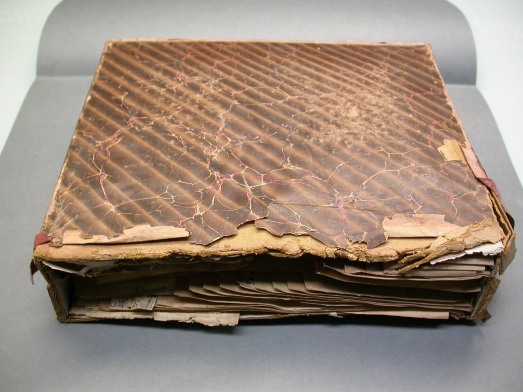 The box files were divided using Amberg’s Patent Index, the contents within being separated and ordered alphabetically in accordance with the index.

These original boxes were acidic, falling apart and, in a number of cases, mouldy. The mould was often superficial and just affected the outside of the box, however, there were 8 extreme cases in which the mould had reached the documents within and caused damage to the items themselves. Missing parts of the boxes meant that the contents had been exposed to atmospheric and particulate pollutants.

After discussions with an Archivist, it was proposed that the contents of all 408 box files would be repackaged in L-velopes or open sided sleeves, with one sleeve being used for each divider in the index (about 25 per file), as the aim was to retain as much of the original format of Amberg’s index as possible. These sleeves were then grouped into grey, archival manila folders, then into clamshell boxes. 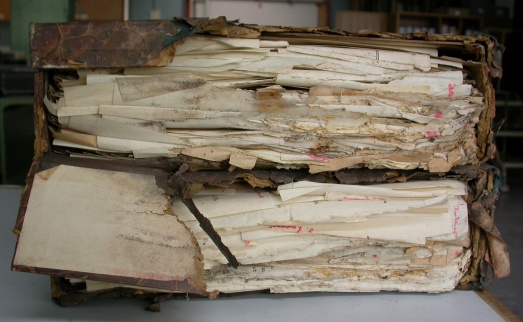 The bulk of the work on this part of the collection was the repackaging. However, in eight of the files mould was a severe problem. 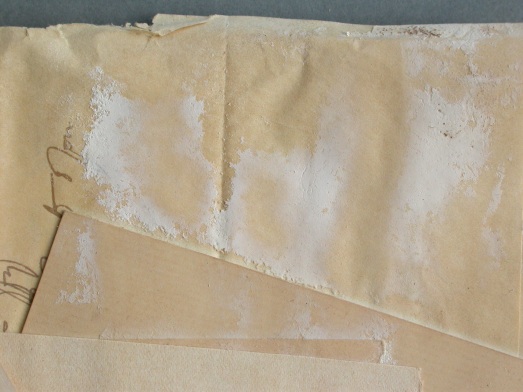 Mould was dry cleaned off the items with the use of a Bassair work station. On many items mould appeared to still be active and had led to severe degradation of the paper supports. It was important that treatments remained minimal and fast, if this part of the project was to be completed on target. For this reason the mould damaged sheets, after mechanical cleaning, were resized with Klucel-G dissolved in IMS, which would kill the mould spores. 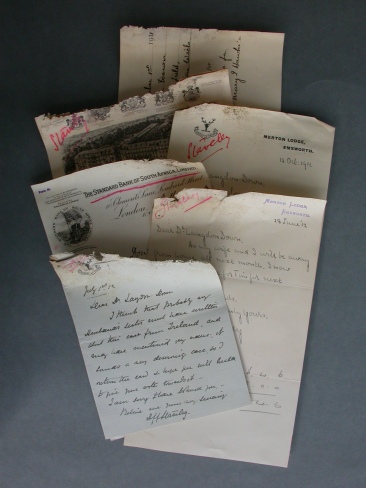 Items prior to mould treatment and repair 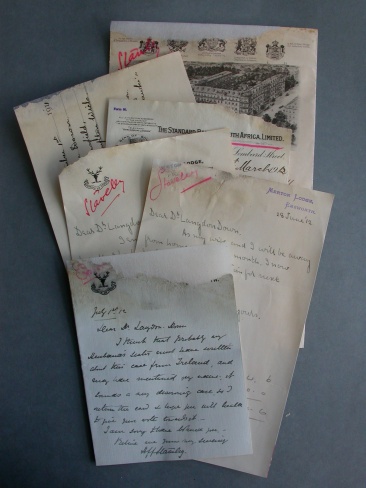 Items after mould treatment and repair

Along with the box files, the other items treated and repackaged throughout this project included: